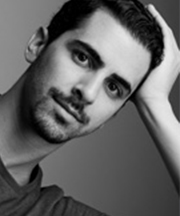 Nir Arieli launched his career as a military photographer for the Israeli magazine Bamachane, before receiving a scholarship to pursue a BFA at New York’s School of Visual Arts; he graduated with honors. Nir's photographic passion is within the portraiture and dance fields. He is an admirer of gentleness, beauty that embodies a sense of conflict and physical intelligence.

Nir received the Silas H. Rhodes Scholarship (2009-2012), SVA's Photography Department Award (2009, 2011) and the 5th Year Award by Gotham Imaging and FotoCare (2012). He was chosen as one of the 2013 talents to watch by "Next" magazine, was a USA winner of Flash Forward (2015) and won 1st place in the PDN "Faces" portrait contest (2012). Nir was nominated for the Tierney Fellowship (2012) and PDN’s 30 New and Emerging Photographers (2013), was a finalist in the Google Photography Prize (2012) as well as in W. magazine's “In A Fashion Minute Video Contest” (2010) and a semi-finalist in the Adobe Design Achievement Awards (2012). His work has been published, exhibited and collected internationally and his New York clients include the Juilliard School, The Ailey School, The School of Visual Arts, Time Out NY, Bloomingdales, Gallim Dance, , MADboots Dance, Hewman Collective, Pontus Lidberg, Loni Landon, Jonah Bokaer and Shannon Gillen, among others.