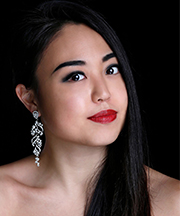 Misaki Hayama, originally from Tokyo, Japan, graduated from Saitama Prefectures High School of Arts and studied dance at Japan University of Art. She performed in a dance ensemble for The Lion King and A Chorus Line in Japan for four years. Misaki attended The Ailey School as a Fellowship Student. She performed at The Apollo Theatre and has worked with Oberdiah Wright, Leslie Dockery, and Alfredo Gillman.