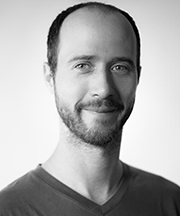 Zachary Ludescher is a Brooklyn-based filmmaker and co-founder of Dakoit Pictures. Zachary began his career editing numerous shorts, commercials, and documentaries, including the 2006 Mid-Atlantic Emmy Award-winning documentary "LifeLinkPSU: A Road to Independence." Since then, he has branched out into high-definition cinematography, shooting a profusion of both narrative and non-narrative work. In addition to his collaboration with Amanda Selwyn Dance Theatre, he is currently producing Beer Nation, a series for the web that follows this country's beers from brewery to pint glass. His latest piece, Brooklyn is for Lovers, can be viewed online at www.goboHD.com.