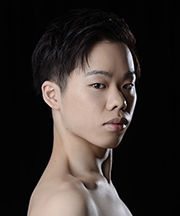 Sho Miya began his jazz dance training with his mother and later was introduced to ballet, studying ballet under Daisuke Takeuchi in Hokkaido, Japan.  In 2015 he moved to New York City to begin training at The Ailey School where he was awarded a Scholarship. He has worked with choreographers such as Ray Mercer, Bradly Shelver, Jonathan Lee, and he has performed Memoria with Alvin Ailey American Dance Theater. Sho is excited to join Amanda Selwyn Dance Theatre this season!