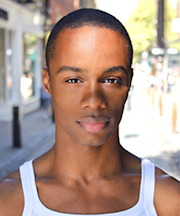 Michael Bishop, a native of Gulfport, Mississippi, started his dance training at the age of 21 as a student at Belhaven University and graduated with a BFA in dance and choreography. He studied Vaganova-based ballet technique as well as Graham-based modern, Caribbean, improv, and hip hop. He was a member of T.A.L.K Dance Co. in Jackson,Mississippi and toured internationally with the company. In 2011, Michael had the opportunity to serve as a Rehearsal Assistant to Christopher Caines for the 2011 International Ballet Competition. In his senior year at university, he received the Bezalel Award for outstanding artistic achievement. Upon graduation he moved to New York City and studied at The Ailey School. Recently Michael became a member of the AGMA Union, Actors Equity Association and is SAG-AFTRA Eligible. His IMDB film and dance credits include: Lost In Manhattan, Strivers Row and Poyzen TV-The Fever Dance Films: Pas De Deux, Afghan Whigs, The Enemy, All Hands On Deck and Self produced Mannequins After Dark. Michael is happy to be dancing with Amanda Selwyn Dance Theatre for a second season!